Recently the Vancouver City Council confirmed a $71M contract to build a new complex for Coal Harbour waterfront school and social housing. As Vancouver becomes more populated, our city must create new developments to meet the demands of the population.  This exciting new development will include a Coal Harbour elementary school, daycare and social housing all in one. Construction for this mixed development takes place between 2022 and Summer 2024. Keep an eye out for this one!

Check out the full article on Daily Hive. 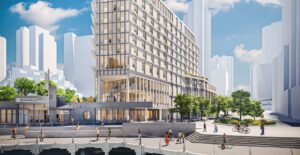 In a recent public meeting, Vancouver City Council confirmed a $70.6 million contract to a contractor to build a new complex on the Coal Harbour waterfront with an elementary school, childcare facility, and social housing.

Haebler Construction Projects is expected to commence construction in early 2022 for a completion by Summer 2024.

The complex will be constructed at the surface parking lot next to the seawall at 480 Broughton Street — at the foot of Broughton Street, immediately west of the Coal Harbour Community Centre. 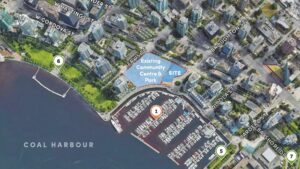 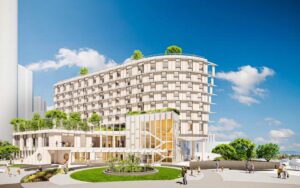 The 127-ft-tall, 11-storey tower will have a 43,000 sq ft elementary school for 340 students within the first three levels, a 9,600 sq ft childcare facility for 64 kids on the fourth level with an outdoor play space on the rooftop of the school, and 60 units of social housing within the upper six levels. The building, designed by local firm Henriquez Partners Architects, will strive for LEED Gold and Passive House green building certifications.

Haebler’s contract value, even after the inclusion of GST, is below city staff’s original project budget of $80.8 million. The awarded contract’s real value sets aside $28.4 million for the school, $9.9 million for the childcare facility, and $32.3 million for the social housing. 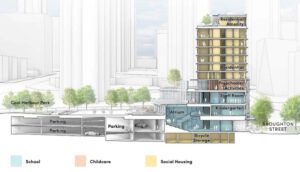 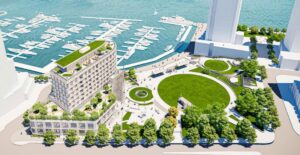 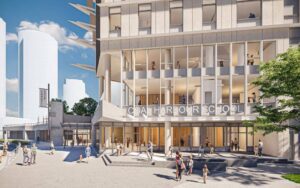 Vancouver School Board (VSB) will cover the complete school cost through a portion of the $75 million it received from BC Hydro. The electric utility reached a deal with VSB in 2018 to use the Lord Roberts Annex school footprint for its new replacement substation at Nelson Park in the West End.

In order for construction to begin on the underground substation, the Coal Harbour school must be built to provide Lord Roberts students with a temporary location.

Towards the end of the decade, a new replacement school, also funded by BC Hydro, will be built over the underground substation, allowing Lord Roberts students to return to Nelson Park. At this latter stage, the Coal Harbour school would effectively become much-needed additional capacity for downtown Vancouver’s elementary school system.

The Coal Harbour project’s review process was expedited by city staff due to the critical need to build the new substation, which will replace the aging Dal Grauer substation on Burrard Street next to Scotiabank Theatre. With a growing population and major new developments, electrical demand within Vancouver is expected to grow by 75% over the next three decades.

Check out the full article on Daily Hive.